Hi, there. I have this question that seems to be a bug, but I really don’t know if I’m messing things up, or I’m mistaken.

I want to use a custom params file to track all the hyperparameters of the model in the framework I’m using (detectron2’ config.yaml) . Just to be clear: I don’t want to use the standard-named “params.yaml”. I’ve already tried to rename the configuration file to params.yaml and it does work, but I’m not allowed to use that because of our project’s naming conventions.

Just to make things easier, I’m working with an example that I found on the internet that should work, just with an echo command.

It creates the following dvc.yaml:

I would like that it says hello to a value of a parameter defined inside a custom param file, for example:

Then, change the original dvc.yaml to the following:

When I run dvc repro, it gives me the following error message:
ERROR: failed to parse 'stages.hello.cmd' in 'dvc.yaml': Could not find 'NAME'

It turns out that if I rename custom.yaml to params.yaml, erasing (or not) the whole “params” section in the dvc.yaml, it works as expected, printing: " Hello Lucas".

My first intuition was that it wasn’t reading my custom.yaml at all. So I tried this third version of dvc.yaml:

Note that I erased the template part from the command, and I intentionally introduced a syntax error on custom.yaml, like this:
NAME: "Lucas

But if fix the syntax error, and restore the template part of the command, it goes back to the first error:
ERROR: failed to parse ‘stages.hello.cmd’ in ‘dvc.yaml’: Could not find ‘NAME’

Any help will be really appreciated.

Hi, Lucas, you can use vars instead of params

Hi, YanxiangGao, thank you very much for your help! It did work! but I’m not getting what I need.

Your suggestion worked perfectly for the example, but dvc didn’t want to take it any further. I’m still not sure if I got it wrong, or dvc isn’t working as expected.

I need to import the whole file. I mean all the params or vars, or just a subset of them, but not just one as the example we just tried.

In the docs I’ve read that it could be achieved using the following ways:

For the whole file:

For some params or vars:

as an example.
No one of them worked. I also tried:

But it didn’t work either.

Once again, thank you very much for your help!!! Any pointers or suggestion will be appreciated!

Hello, @lucas , you do not need to add a : after custom.yaml, it’s invalid in yaml format, some thing like

Ok, YanxiangGao, great! It works as you proposed, thank you very much!!

I think I misunderstood the syntax, since from the docs (params section) I’ve understood that a colon is needed in order to import all params from the custom params file. 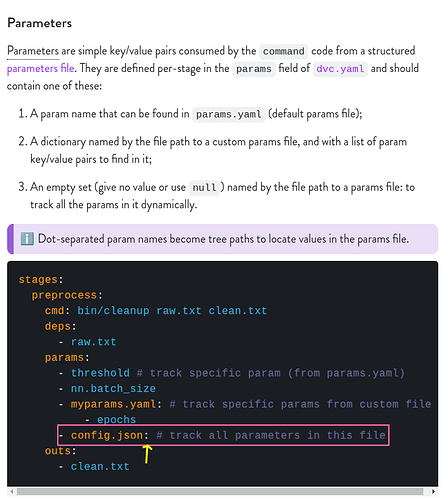 But it doesn’t work anyway (with or without colon).

Checking the documentation of the “vars” section, it says exactly what you’ve suggested, and works

For now, it’s enough for me. I mean, I can start to work with this.

Anyway, I think there’s a bug in parameters functionality in dvc, or documentation should be properly fixed in the Templating section, since it only works when the default parameters file (params.yaml) is used.